Do you know how to fight right in your relationship? 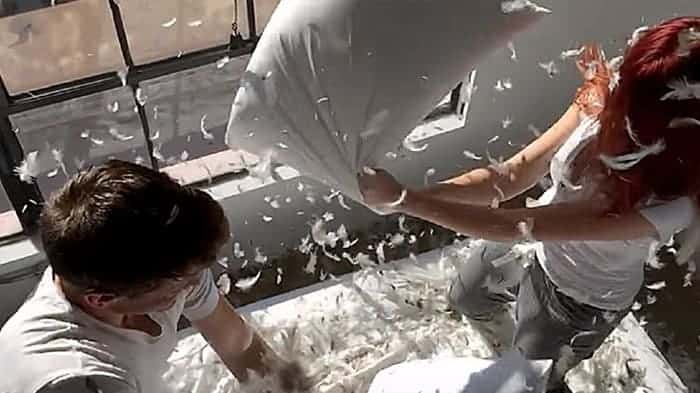 Guess what? International Pillow Fight Day takes place this month (yes, there really is a day for everything, folks!).
And, while it might sound daft, there’s nothing like a light hearted playfight with your other half to let off steam, behave like big kids and descend into giggles together, whether that’s fighting with pillows, chasing each other with dishcloths or racing each other down the street.
In fact, in the early stages of a relationship, when the physical stuff is just getting going and you’re giddy and nervous around each other’s bodies, something as silly and harmless as a pillow fight often helps channel sexual tension and build intimacy.

But while teasing each other and laughing about it will bring you closer together, not all fighting is good for your budding relationship. In fact, if you don’t figure out how to fight right early on, things can turn toxic.
That’s partly because, as research by psychoanalyst Otto Kernberg suggests, the neurobiological and psychological processes we go through when we experience love are worryingly close to those that spur on aggression.
To have a healthy relationship, you must learn to navigate between the two – to work out when your combative impulses are valid, and when they’re caused by fear or the strain of becoming emotionally vulnerable around someone new.
Because it’s okay to feel flushes of attraction, neediness, jealousy, possessiveness or the fear that someone could wound us – all of which very often come with falling in love.
But if you don’t handle these feelings properly, interrogating them fully and recognising when you’re repeating self-destructive behaviour from past relationship battles, you could wind up hurting your new love and yourself.

How not to fight

Ever found yourself in this situation? You’re on a date, things are going well, when you start talking about something a little more serious, or personal, maybe even political. Your date says something you don’t agree with and you question it, or express a different opinion. Immediately the atmosphere sours. They get angry or sink into a sulk. You struggle to pull the conversation back. Everything seems ruined.
Or maybe you’ve been chatting away quite comfortably – perhaps about something you’re a little raw about – and they say something insensitive or challenge you, out of the blue. You feel hurt, under attack, or insulted. Perhaps YOU get angry or upset. Perhaps YOU sulk.
The other person is bewildered. They don’t know what they’ve done. But you’re seething. Clearly, this wasn’t meant to be, right?

In either these situations, can you be sure either of you really did or said anything wrong?
Or did one of you just express yourself the wrong way?
Equally likely, is one of you still hurting, still stuck in the rut of your old relationship – ready to fly off the handle at a perceived slight because you can’t help but hear their words in your ex’s voice?
No one ever leaves a relationship unscathed. It takes work to heal and, until you have, you carry the scars. Perhaps you’ve ignored them so long you can’t even see or feel them anymore, but as soon as someone else says something that reminds you of the wound – even by accident – you can’t help picking at the scabs.
And suddenly, there you are, bleeding all over again. And you blame them for making the pain rush to the surface, even if they have no idea what they’ve done

Listen to your feelings –

But listen to where they’re coming from, too

Okay, you feel stung. Perhaps the other person really did step out of line, but perhaps they touched a nerve without meaning to.
Step away for a breather. Say you need to pop to the bathroom. Take a moment to pinpoint exactly what they said that hurt you. Ask yourself, reasonably, whether they could have known that it would have this effect.
Then, if you still feel unsettled, go back and calmly explain, rationally and without blame, what upset you and why.

Be gentle with each other

Its fine to explain things from your point of view, or to use personal anecdotes, to explain why you think the way you do. But don’t launch a personal attack on the other person’s character, personality, anxieties or perceived weaknesses to score a few points.
When you’re having a conversation about something like, say, politics, it’s essential to clarify that you aren’t criticizing the other person, you’re discussing something separate to both of you and that you care about understanding their point of view, even if you don’t agree with it.

Even if you ARE challenging someone’s behaviour, stay on track. Emphasize that you are uncomfortable with a certain thing they did or said, and explain why. Don’t exaggerate or emotionally blackmail them, just calmly state your point of view. If they respect you, they should hear you and be willing to talk it through.
And if you can see someone getting upset and emotional, ask yourself whether you need to win this battle, right now, and whether you really want to injure them and potentially destroy your relationship in the process. What do you gain by tearing them to shreds?
Yes, this could be an issue that’s so important to you that you need to come back to the conversation another time. If so, wait until you’re both calm.
But perhaps you don’t need to push them so hard. Perhaps there’s a reason this subject has such a profound effect on them – one that you need to tease out in time, as trust develops.

Conflict discussion can go one of two directions. Generally when the discussion escalates, it ends badly and neither partner has gained any ground. When the conversation de-escalates, it creates room for dialogue. In order to prevent escalation, don’t find fault, don’t bring up the past and don’t keep going once the conversation is off the rails. Master couples have an ability to repair a conflict discussion early and often in order to keep it from escalating and becoming unproductive.

In other words, when an argument starts to get nasty, don’t fuel the fire. Recognise that, when thing get heated, it no longer matters who is wrong or right, because once you’re both angry, all you’ll care about is standing your ground.

Instead, take steps to diffuse it. Try to find the parts of what they’re saying that you DO agree with, and build from there, explaining where you feel slightly differently, and why.
And whatever you do, don’t let the argument shift into being about something else. If they try to move to goalposts, say something like: “Ok, I’m happy to talk about that too, but right now can we just stay on this one topic,” or even: “I’m not sure what we’re arguing about anymore. Shall we come back to this another time when we’re less het up?”

In our Spark Marriage program, we address all these points and more!

Be prepared to say sorry

Never underestimate the power of an apology.
If you know you said things that were harsh and cruel, you became aggressive, the other person was visibly upset, or there was anything about the way you behaved that now, in the cold light of day, seems unnecessary: SAY SORRY.
You don’t have to tell them they were right. You don’t have to back down from your stance or opinion. But DO apologise for the way you made them feel.

Be kind when you’re not fighting

Usually when disagreements explode into full-blown war, it’s because one or both of you already resentments or relationship anxieties bubbling away.
Going out of your way to show your partner that you see them, hear them, and support them during “peacetime” helps make them feel safer emotionally.
That means listening – really listening – to each other, celebrating each other’s successes, remembering to drop them a note or give them a call to check in when you know they’re worried, in need of a pep talk or outlet (for instance, before and after an interview, exam, presentation or dreaded doctor’s appointment). It also means simple, thoughtful things, like bringing them a cup of tea in the morning or running them a bath when they’re exhausted.
The point is, the more “cared for” someone feels, the less likely they are to let the claws ping out the second they feel threatened by a disagreement.
Oh, and when you start to annoy each other… maybe just have a pillow fight to ease the tension instead.
If you enjoyed this post, I’d be very grateful if you’d help it spread by emailing it to a friend, or sharing it on Twitter or Facebook.