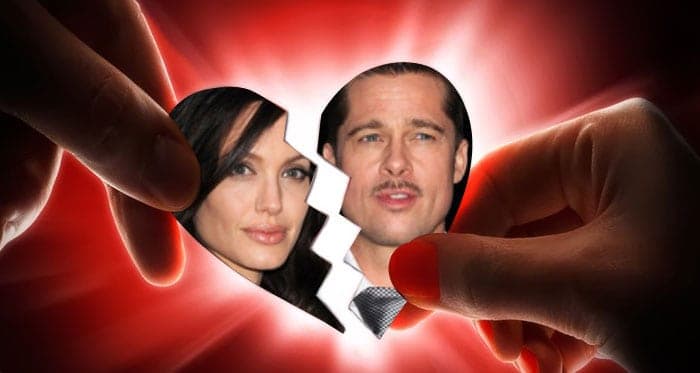 Brad, Angelina and the Death of the “Perfect” Relationship
Ever been told “Oh my god, you guys are just SO GOOD together?” even as the doubts are starting to set in?
Or had friends roll their eyes when you mention issues that are starting to bother you because hey, your relationship is great – what are you whining about?
Or worse: broken up with your partner after much painful soul-searching, only to have your parents say: “Are you crazy? They were perfect for you!”

The problem with being the “perfect couple” is that you’re never allowed to break the illusion. The daily problems and struggles that every marriage experiences are glossed over, ignored, denied.
Sanitised for other people.
This puts insane, unrealistic pressure on your relationship. It makes you feel like every imperfection or tension is a personal failure. It prevents you approaching problems head on and working through them rationally. It speeds up the demise of your marriage when the cracks start to form.
And eventually, it deprives you of the support you desperately need right when you need it most: after your divorce.

Let’s take a look at the Brangelina breakup for a moment. These are two of the most beautiful, successful people in the world.
Two people that, on the face of it, seem to have the most picture perfect marriage.
They’re wealthy. They’re both top of their profession. They’ve worked together on a ton of successful projects, as well as pursuing independent goals. They’ve raised a beautiful family. They travel all over the world and own houses in far flung, exotic locations.

“It doesn’t matter how rich or beautiful you are, presenting a sanitised version of your relationship is exhausting.”

But you know what else?
They’re two people who spent their entire ten-year relationship in the public eye. Who have had to perform being happy in love for a press mob that picks apart every word and gesture for a decade.
They’ve had to put a flawless face forward even as they’ve negotiated some of the most stressful and emotionally exhausting events a couple can possibly experience together: the serious health problems and multiple, invasive surgeries, the death of parents, the high profile criticism of professional and personal choices, adopting and raising children, running their own businesses and managing their own creative projects.
Who had to cultivate a façade even for those people they see and speak to and confide in every day, in case their words are sold to a newspaper by a “source close to them”.

It doesn’t matter how rich or beautiful you are, presenting a sanitised version of your relationship is exhausting. There’s only so long you can pretend that difficult, hurtful, stressful things aren’t taking their toll on your relationship. And when it falls apart, you absolutely need people who love you to step in, give you a hug, listen to you talk about what you’re going through and really listen.
Now, hopefully no one reading this will ever be in a position where the dirty laundry of their divorce is publicly strung up in the tabloid press, but I’m sure many can relate to the feeling that you’ve been horribly misrepresented by your partner, by your friends and family, by your social circle, or even (if, for example, you’re battling for custody) in a court of law.
If you’ve gone out of your way to present the happiest, shiniest, most perfect version of your marriage until now, it can be particularly hard to counter or handle this. Especially if everyone adores your ex and you’ve never attempted to disabuse them of the notion that this person is just as perfect as you’d always let them believe.

How do you backtrack?

How do you persuade them, after all this time, that actually things weren’t as wonderful as they seemed, behind the scenes? How do you trust someone to really listen and be supportive when you feel that they’re judging you harshly for “throwing it all away”?
Here’s the thing: you’re not going to be able to change a bunch of people’s minds when they’re dead set on siding with your ex. And do you really need to, anyway? What will you gain by it? Is it going to help you to move on?
Of course, if you’ve spent years putting on a show of being the perfect couple, it will most likely cut you deep that you’ve lost control of your “public image” now. You might panic that people no longer see in in the positive way they’ve always seen you in – or even as the cause of your relationship’s breakdown. At this point, it’s tempting to go on the offensive, painting yourself as the victim and telling everyone who will listen about your ex’s every fault.

But this will not help you heal and move on. In fact, it will do exactly the opposite.
Firstly, you will probably end up fighting a proxy war of he-did-this-she-did-this with your ex via your friendship group. That’s bound to get ugly, souring your relationship with your ex even more and leading to stuff coming out about you that you really didn’t want shared.
Secondly, you’ll find yourself becoming a person that you just don’t like. After all these years of fierce loyalty to your partner, striving to show both of you in your best light, here you are bad mouthing or exaggerating their faults to score points. That has to feel a bit grubby. It has to detract from whatever was actually beautiful about the time you shared together.

If you go as far as betraying the trust of that person, unnecessarily disclosing intimate secrets or things that will really hurt or embarrass them, that’s even worse. Mutual friends will most likely think less of you for being so vindictive, your ex will (rightly) be appalled and you will have lost the moral high ground forever. From there, you can only keep clinging your ex’s wrongdoings and your victimhood in an attempt to justify yourself, admit guilt and grovel to your ex / your social circle for forgiveness, or continue along a path of petty revenge. None of these is exactly going to make you feel great about yourself.
Of course, that doesn’t mean you should lie, cover up your feelings or sugar coat anything your ex has done that led to this breakup. You’ve done enough of that already, and it probably contributed to your marriage’s demise.

“It’s tempting to go on the offensive, painting yourself as the victim and telling everyone who will listen about your ex’s every fault. But this will not help you to heal and move on. In fact, it will do exactly the opposite.”

Instead, it’s a case of being honest with a small circle of people you really trust, and being painfully diplomatic with everyone else.
Again, let’s go back to Brangelina. If, like them, you’re splitting up under the media glare, you have to be incredibly careful about what you say and who you tell. After all, they have six kids to protect as well as each other’s feelings, and they certainly don’t want to go feeding the sharks.
Instead, they decline to comment, or release carefully worded statements like this one, from Brad Pitt:

“I am very saddened by this, but what matters most now is the wellbeing of our kids… I kindly ask the press to give them the space they deserve during this challenging time.”

“I am very saddened by this, but what matters most now is the wellbeing of our kids… I kindly ask the press to give them the space they deserve during this challenging time.”
Okay, you might not have to worry about hacks quoting you out of context, but you can take a valuable lesson from this. People are people and they will gossip and twist your words. This is even more the case if your relationship always looked perfect from the outside and your breakup came as a shock.

Make sure you sit down the people closest to you and tell them, frankly, that while things weren’t as rosy as you perhaps made them out to be, you are trying hard to keep things civil. Be strong: don’t minimise the things that hurt you or allow them to make you feel these were nothing, but don’t exaggerate them either. Emphasise that you’ve already made your decision and now you need their support, not their judgement.
Ask them to keep what you tell them to yourself. Be open about what you need from them in terms of emotional support. Tell them you’re hurting. Tell them you’re scared.

“If you want to heal, you’ll have to focus on dealing with your own pain and the proactive steps you’re going to take to move on and get your life on track – on your own.”

But apart from the specific concerns and frustrations you need to get off your chest, don’t make it all about trash talking your ex. This will become exhausting very, very fast and will prevent you from moving on.
The same goes for people who will inevitably pry or try to goad you into saying things about your ex you wish you hadn’t. Be gracious about this. Say that you don’t want to speak ill of them or go into detail about what went wrong, but ultimately it didn’t work out and you wish them well. Then change the subject and don’t get drawn in: you will feel better about it, and you will come out looking like the better person.

You have to let them go

Ultimately, the important thing is that you don’t fixate on your ex. After all, you’ve broken up now. They should absolutely not be the central focus of your life. You have to let them go.
If you want to heal, you’ll have to focus on dealing with your own pain and the proactive steps you’re going to move on and get your life on track – on your own. You need to work on treating the wound, not keeping it visibly open to win the support of your friends.
If you’re lucky enough to avoid a divorce as public as Brad Pitt and Angelina Jolie’s, embrace the privacy that this gives you to heal. Don’t turn it into a min media circus of your own creation. At the end of the day, it’s you that will get hurt.