Are You Defeated – or Stronger – for Your Trauma? 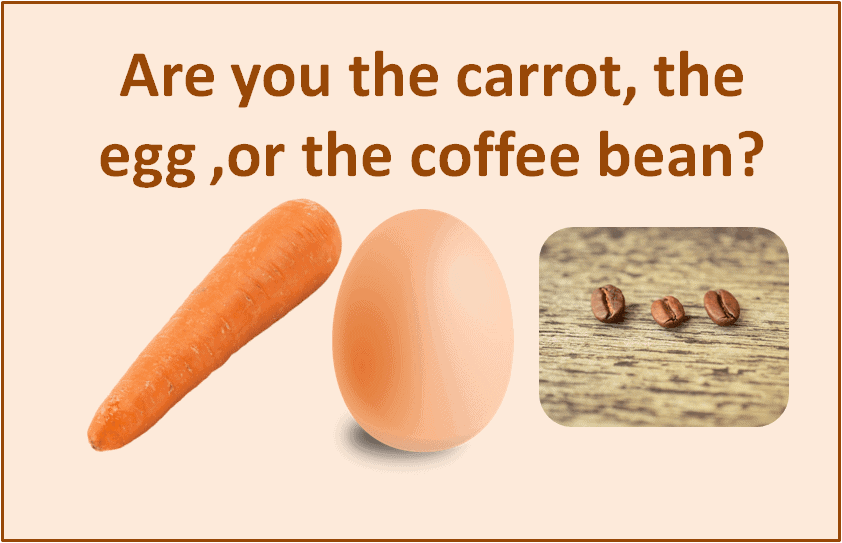 A young woman went to her mother one day and told her despairingly about her life and how things were so hard for her.

She just didn’t know how she was going to make it and wanted to give up. She was tired of fighting and struggling. It seemed as one problem was solved, a new one arose.
Without saying a word, her mother stood up and took her to the kitchen. There she filled three pots with water and put them on the stove to boil.

Then she let them sit and boil before turning the burners off twenty minutes later. Her daughter just watched, confused. Her mother took the boiled carrots out, placed them in a bowl, and did the same with the eggs and coffee – all in three separate bowls.
She turned to her daughter and asked, “Tell me, what do you see?”
“Carrots, eggs, and coffee,” the daughter replied, bemused.
Her mother asked her to feel the carrots. She did and noted that they were soft. Then her mother asked her to take an egg and break it. After pulling off the shell, she saw the hard-boiled egg inside. Finally, her mother asked her to sip the coffee. The daughter smiled as she smelled the aroma and tasted its rich flavour.
“But what does it mean?” the daughter asked.

Her mother explained that each of these objects faced the same adversity – boiling water – but each came through it differently.

The carrot went in strong, hard, and unrelenting, but after being subjected to the boiling water, it softened and became weak. The egg had been fragile. Its thin outer shell had protected its liquid interior, but after sitting through the boiling water, its inside became tough and hardened.
The ground coffee beans were unique, however. After they were boiled, they had changed the water, making it fragrant and giving it flavour.
“So, which are you?” the mother asked her daughter. “When adversity comes knocking on your door, how do you respond? Are you a carrot, an egg or a coffee bean?

When facing a challenge in life are you weakened and do you feel defeated by the experience? Are you a carrot? Or do you become hardened inside, and bitter because of the event, like the egg? Or are you the coffee beans?

Do you see the challenge and adverse event as an opportunity to influence those around you for the better, to make a positive difference, to leave the situation better than when you started, to add a little richness to life?

YOU can choose which one you are. How you respond to trauma and adversity is completely within your power, and no one else’s. It’s possible to be the coffee beans, so BE the coffee beans. And NOW is the time to start working towards it!

Share your thoughts! Which one are you – carrot, egg or coffee? I’d love to hear from you!

One thought on “Are You Defeated – or Stronger – for Your Trauma?”