Go on, give yourself permission to climb into a Porg-hole! 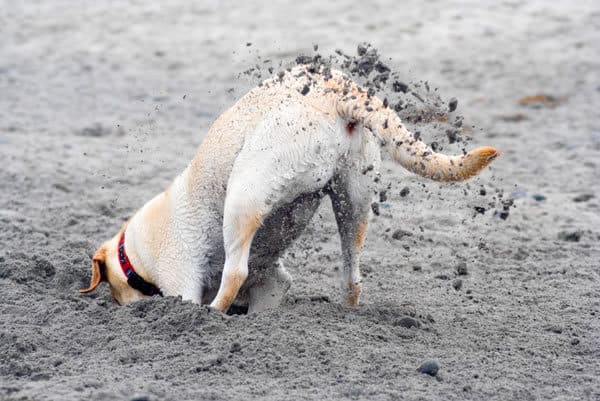 When I was little, I had a bull terrier named Porgie. I loved her so much so, that I would greet her on all fours, hide her in my bed so she wouldnt be cold and even come home and climb into her dog basket with her. She was an absolutely mental dog and I loved her craziness and zaniness. Porgie however, was no ordinary dog. She harboured a secret.

Not only did she chase her tail with joy, sit in the pantry and slip in her own drool waiting for a dog biscuit and eat noisily like each meal was her last, she had an inner wisdom which far exceeded her dog years.

I truly believe that Porgie was a guru in a previous lifetime.

Every few months, Porgie would be in a bad mood. Who knows what caused it – perhaps hormones, a phantom pregnancy, or pluto aligning incorrectly with Venus. When this happened, she would go to the bottom of the garden and go dig a hole. She would then crawl into this ‘Porg-hole’ and growl if anyone came near her. I would attempt to coax her out with food but she didn’t come out and she let me know that I was not welcome. 3-4 days later, she would come out of the hole, cover it up and come bounding back as if nothing had happened.

I used to think this was more evidence that my dog was weird and unwell but actually thinking back on it today – it was sheer genius.

In today’s society, we don’t ever allow ourselves to dwell in a bad mood. We are told to ‘snap out of it’, ‘cheer up’ and be happy. The dawn of Emotional Intelligence has created an international outbreak of suppressed human beings who don’t allow themselves to just be grumpy and to just be with their grumpiness, unhappiness or depression until is passes. Instead we must apply an emotional avoidance trigger or tranquillise ourselves with alcohol, drugs or antidepressants until ‘rational intelligence returns’.

GROWL. What Daniel Goleman didn’t realise when he wrote his NY Times bestseller ‘Emotional Intelligence’, was that he helped contribute to the mass suppression of emotions which is commonplace in today’s society. Instead of expressing raw emotions, feeling them authentically, crying, screaming and just being grumpy when we feel grumpy, we are expected to be cool, calm, collected robots who smile politely, play political ping pong with the sales guy we hate and certainly don’t flinch in the boardroom when someone missed a deadline and messed up our project.

Your EQ is now more important than your IQ as this man managed to convince and advise nations that suppression is healthy, balanced and somehow good for us.
In describing the importance of acknowledging our emotional states, American psychologist Dr Maurice Elias says, “Emotions are human beings, i.e. warning systems as to what is really going on around them. Emotions are our most reliable indicators of how things are going in our lives. Emotions help keep us on the right track by making sure that we are led by more than the mental/intellectual faculties of thought, perception, reason, and memory.”

In her article titled ‘How to Understand, Express and Release your Emotions’, author Mary Kurus, a renowned psychologist based in New York, writes that emotions control our thinking, behavior and actions. If you ignore, dismiss or repress your feelings, you’re setting yourself up for physical illness.
The understanding is that emotions that are not felt and released can spawn a host of ailments: cancers, arthritis, and many types of chronic illnesses. The explanation is that negative emotions such as fear, anxiety, negativity, frustration and depression cause chemical reactions in our bodies that are very different from the chemicals released when we feel positive emotions such as happiness and contentment and also when we’re feeling loved and accepted.

Signs that you are repressing your emotions

When we have an experience that is painful or difficult we often dismiss the emotions or bury them under busyness, exercise, comfort eating or drinking. The problem is that our suppressed emotions don’t like being hidden. Our negative feelings stay with us; in the muscles, ligaments, stomach and midriff. These emotions remain buried within us until we allow ourselves to feel them and deal with them, thereby releasing them.
Short Term Emotion Avoidance Triggers (STEATs) and other ‘methods’ we use to suppress or avoid our emotions:

You cannot control your emotions BUT truly acknowledging them and feeling them, allows them to move on
You cannot change or control your emotions. Think of the people who trundle along day after day, seeming to function normally. And then one day they’ll suddenly explode over something seemingly trivial or harmless. This behavior is a result of a pressure-cooker syndrome; apply a little heat in the form of a tense situation and repressed emotions boil over. The more you try to control your emotions the more your emotions resist. Eventually you lose emotional control. It’s a vicious cycle.

It’s not popular in today’s society to express negative emotions in public. Seeming out of control is interpreted as a sign of weakness. We’re often uncomfortable around people who express strong emotions. As a society we’re taught to hide our emotions, to be ashamed of them and to be afraid of them.

We spend a great deal of time talking ‘about’ our feelings and emotions and very little time actually processing and feeling them. We attend workshops, visit therapists, and they describe how we feel.
We talk and talk about our emotions, intellectualizing and analyzing them, but how much time do we actually spend feeling them?
We are emotional creations and we must learn how to know our emotions, be with them, and release them in healthy ways.

I have written another blog on HOW to release emotions healthily – you can read that here: https://nakeddivorce.com/blog/how-to-release-your-emotions-during-your-divorce/.

Although I disagree with Daniel Goleman and his thoughts on ultimately intellectualising our emotions before we give ourself permission to feel them – taking out our frustrations on others is also not particularly evolved. I know he wrote his book to prevent irrational rants in the workplace but the problem is we have become deader and more resigned than ever. Depression rates have never been so high as they are today and some psychologists believe that depression is simply long term suppression of emotion.

So Porgie had it right after all.

Feeling crabby? Go dig a hole away from others and go BE crabby and do not stop being crabby until you feel pruney with your crabbiness. Growl. Its really fun actually. Surrender to the emotions, feel them and be them until they naturally pass and peel away like layers of an onion. The crabiness is concealing a deep sadness, fear or anger so get to the root cause of your emotion so you can release the tension in your body and prevent long term illness from happening.

So, to hell with your EQ, smiling when you don’t mean it and fake bubbliness- its plastic and weird. Let people know how you feel in life. Give yourself permission to be a glorious crabby depressed mess until you are sick to death of it. Give yourself permission to climb into a Porg hole today – you will feel a hellava lots happier tomorrow and guarantee longer healthier life too.

Thanks be to Guru Porgie…

2 thoughts on “Go on, give yourself permission to climb into a Porg-hole!”